So they’re at it again. With a swipe of their mighty finger search giant Google has once again put the search industry into a spin with its latest update to the search results pages.

On Friday the 19th February 2016, Google removed the ads from the right hand side of search results pages. This change has been made across Google and its search partner network and rolled out worldwide, all in one fell swoop. Google has confirmed that they will be displaying up to four adverts above organic results, up from a maximum of three previously, with a further three adverts at the foot of the organic listings, up from a previous maximum of two.

For now, one set of adverts that won’t be impacted by this update is Shopping ads. These will still appear in the right hand column at the top of the search results pages. Knowledge panel results will also be unaffected by this update.

The removal of the ads from the right hand side and the changes in the numbers of ads sandwiching the organic results means that where previously advertisers were competing for approximately eleven text ad slots, they are now competing for around just seven spaces, a decrease of more than 36%. This has understandably caused some concern amongst PPC agencies and smaller businesses who relied on the slim pickings just featuring on the right hand side adverts offered.

In the screenshots below you can see how this change impacts a search for something as simple as the term ‘sofa’.
Clearly the right hand side adverts have now disappeared allowing for a larger panel of Shopping ads to be displayed for this particular query. But it isn’t just the paid ad slots that are impacted by that change. Take a look at the screenshot below of the full search results page for the search query ‘sofa’.

From an SEO perspective there’s an immediate concern. Above the fold there is no organic presence whatsoever. Nothing. Google has built a billion dollar algorithm to decide which organic result comes out on top and companies have no doubt invested huge sums of money into SEO campaigns to attain that holy grail of being ranked number one for a head term such as ‘sofa’. And yet now that number one organic result isn’t even being shown above the fold. Cheers Google.

In fact looking at the full SERP for this search, if you count each ad in the Shopping panel as an individual advert there’s a total of 15 adverts on this page. And if you count each local listing and each of the images within the organic section as an individual organic listing then there’s a grand total of 16 organic listings. In other words for this search query we see an almost perfect 50-50 split between paid and organic results but the prime real estate at the top of the page and above the fold is exclusively given over to those with deep enough pockets to pay to be there. In fact the result that would have traditionally been considered to be organically ranked third now has 16 other results above it if you include each of the Shopping Ads and the three local listings.

Google have suggested that we’re only likely to see four adverts appearing at the top of the page for ‘highly commercial’ search queries. Now I guess you could suggest a search for the term ‘sofa’ is highly commercial but as Moz’s Dr Pete tweeted, Google’s definition of ‘highly commercial’ may differ significantly from most people’s understanding of that phrase. 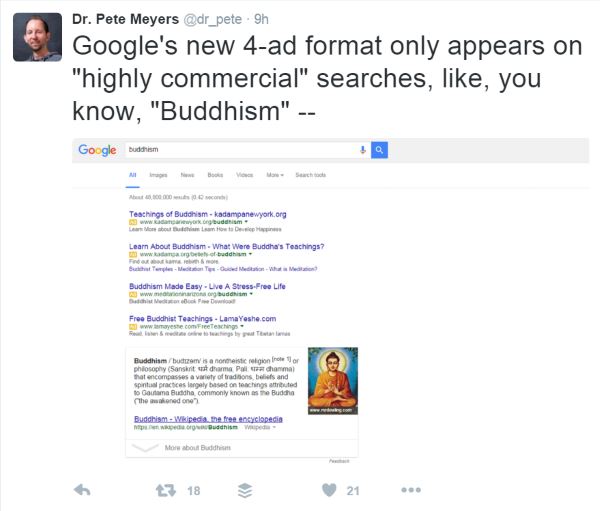 It’s a good question and probably one without a definitive answer. Some suggestions are that the right hand side adverts received such a low click through rate that there was little reason to keep them. However we know from working with some of our clients that where they couldn’t compete for the top three spots they were happy to feature in the right hand side adverts for the more competitive and expensive terms in their sector and that they did indeed receive clicks and conversions from this. So isn’t Google losing out on revenue by removing these ads?

Google will likely have done the sums on this and it’s unlikely they will be losing out financially from these changes. The removal of the right hand adverts has instantly made the ads that appear above the organic results that much more valuable.

As advertisers clamour to appear in this more exclusive space cost-per-clicks are only likely to increase as the bidding war begins. It’s the basic principle of supply and demand and Google certainly knows this. By adding an additional spot in this prime position will likely see those that can afford it now increasing their bids to ensure in this exclusive top four therefore offsetting any revenue lost from clicks previously made on the right hand ads.

We also have our own suspicion that perhaps the space in the right hand column is being freed up for something else. The ever increasing presence of localised organic results and the testing of paid local listings we’ve seen in the US for in home services could be a clue as to where Google may be heading. Is it possible this space is being made available for paid localised adverts in the future? 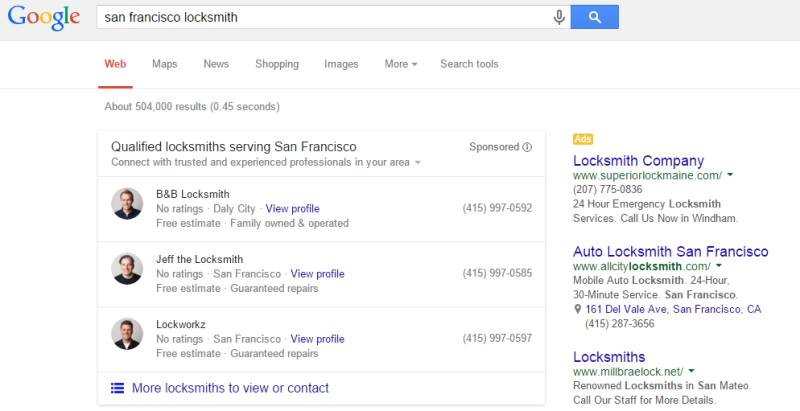 What’s going to be the impact?

As is often the case with major Google changes it’s likely to be the little guys that are most heavily impacted in a negative way. Overnight, businesses that could not afford the going cost per click rate to feature in the converted adverts that featured above the organic results have had their paid presence on Google wiped out. Yes the click through rates on these right hand ads were much lower than the ads in the prime slots but they still got clicks and they still generated lead and sales for companies that could only afford to be there.

Now if you are unable to compete for the top four spots you are left with the option of paying a similar cost-per-click for an advert that sits at the foot of the page, underneath four other adverts and somewhere in the region of ten organic results. How does the click through rate for these ads compare to the right hand side ads I wonder?

Now smaller companies are left trying to compete with organisations with much deeper pockets in a David v Goliath battle that unfortunately David is unlikely to win. Alternatively they can to try and focus on SEO and improve their organic presence. Given it is often the smaller companies that have the least time, resources and in house skills it is possible we may see more of these smaller companies reallocating their ad spend budgets towards bringing SEO skills in house or hiring an agency to help them given they have no other way to compete.

There is also a possibility that we’ll see clients looking to reallocate their Google AdWords budget towards other paid channels or platforms instead. Could Bing and Yahoo suddenly see an influx of ad spend budget coming their way or perhaps we’ll see companies moving budgets towards paid social campaigns instead where they may feel there may be a better return on ad spend instead of getting into a bidding war on Google.

So what do you do?

With a change this big it’s going to take a while to see how this works out for each individual business but we don’t recommend making sudden changes or panicking just yet. If you are an ecommerce retailer and you aren’t currently running Shopping campaigns then this is certainly something you will want to try and get set up as the cost-per-click do not tend to be as high as those for the text ads in the top positions. Smaller businesses, local storefront businesses and businesses that serve a local area only are likely to be most impacted by the removal of these ads. If that describes your business then we’d highly recommend looking to improve your local organic presence through a local SEO campaign. As you’ll have seen from some of the screenshots, localised results tend to appear higher up the page than the vast majority of the traditional organic results.

For B2B lead generation style businesses that serve the whole of the UK and do not have the option of running Shopping campaigns we would suggest you avoid taking any immediate action. For the moment you need to monitor your AdWords account and Analytics data and try to measure the impact these changes may have. Do not be tempted to simply up all your bids in the hope of minimising the impact this may have. You need to take a strategic approach to any changes you make to your AdWords account and you can’t do that until you have the data to inform you of the impact these changes have had.

It’s a big change from Google and it’s still early days to properly assess the impact but it has no doubt shaken things up in both the PPC and SEO community. It also serves as another reminder that we are all at the mercy of Google. Those involved in SEO are perhaps more used to having major changes dropped on them unannounced and having to scramble to adjust their approach to campaigns but for those in PPC this shake up is perhaps the biggest they’ve seen since Shopping ads were introduced in late 2010.

If you have been impacted by this latest Google update or would like us to assess this on your behalf then please don’t hesitate to contact us 0116 254 7224 or get in touch via our contact form.