The Importance of Video Part II 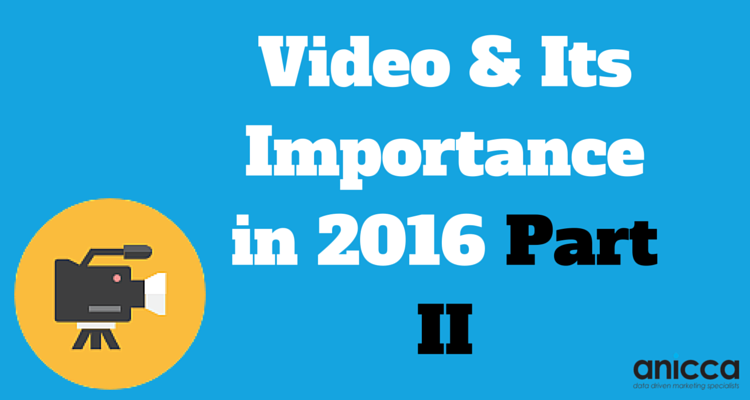 At the end of last year, I wrote a blog post about the importance of video in 2015 and 2016.
Since writing that post, we’ve seen a wealth of changes. Video marketing is developing at an incredible rate. This means that inevitably, there have been changes. Let’s take a look at some of them:

Quite a bit of changes there.

Here’s a few stats for your number nerds out there:

Two of the most impactful changes include Instagram’s carousel video ads and YouTube’s 6 second Bumper ads.

Much like Facebook’s carousel ad format, the new Instagram ad format allows advertisers to include five videos within the carousel to allow opportunities for unique storytelling.

Here’s a cool example of a carousel ad on Instagram.

US fast food restaurant chain Taco Bell have utilised this carousel in a creative way. Through light hearted ridiculing, a story is told through a series of effective videos.

One of the most impactful changes there are the Bumper Ads. Not only does YouTube give advertisers a platform in which to tell a story within 6 seconds, but it also provides an opportunity to drive clickthroughs, sales or simply inspire people in a matter of seconds. That in itself is an incredible prospect.

Let’s break this down for a moment.

In 2000, our average attention span was 12 seconds. That doesn’t sound like a lot at all. In 2013, it decreased to 8 seconds – 1 second LESS than a Goldfish. That’s a little embarrassing. I mean, we shouldn’t be surprised, we’re surrounded with content and media that enables this attention span. 140 characters, 15 second videos, everywhere we look we’re treated to a multitude of short-form content.

These Bumper Ads are huge opportunities for advertisers and publishers to create pieces of short-form content that’ll capture the viewers’ attention.

A couple of examples:

The true purpose of this post was twofold; to inform you, our Anicca blog readers of the latest changes that have occurred in video, and to inform you about our next Leicester Digital event, at which I’ll be speaking at.
Taking place on June 7th (the second Tuesday of each month, folks), this month’s event centres around the growth and impact of video over the last year and what it can do for your business.

I’ll also be covering aspects of how simple it can be to create high-quality video using only your phone.

Please join us on June 7th at the Exchange Bar located opposite The Curve Theatre.

If you haven’t already, register for the event here.