The future of digital marketing

I recently attended the Digital Growth Conference and I was blown away by the keynote speaker Andrew Grill a practical futurist.   Andrew has previously managed six technology start-ups over a 12 year period and he uses this experience to enrich SMEs with ideas to drive growth.  So here are some key take-aways for you to harness.

There are many ways you can promote your business; but you need to be thinking outside of the box!

In the US, 85% of Millenials have ad blockers. Users are getting smarter, and as voice search starts to take over, companies need to look at ways to build their businesses to get in front of their audience.

Many new technologies and businesses are made from what is already there – using something or combining things to make them more convenient – Just eat, Amazon, uber etc nothing new just a new concept.

The key take-away is to think about what’s there and combine or make it better – high profits come from new tech to handle what’s already working but speeds up the process or follows consumer demands.

Uber started life as a limo sharing app and they pivoted to make it better as the market share was so small. They now have taxi companies worried and have disrupted a market. Airbnb started out as a company that pointed people to someone who could share an air mattress in their home, hence the name Airbnb.  Again they realised that the number of people with an air mattress in the US was quite small and they had to pivot. Airbnb is now disrupting the short-term rental market because you can pick and choose your length of stay. It is also affecting the holiday let market and hoteliers as people choose a cheaper alternative.

Netflix is another example, they used to be a DVD mail order company and as things turned digital, they pivoted to a new way of life. Rather than using budget for physical DVDs, they have put their money into creating original series and films using some big-name stars. This has then also disrupted the film industry as stars such as Will Smith are being cast for these films rather than cinema releases. People are now turning to Netflix as they have more choice than the traditional alternative such as Freeview, Sky and Cable. Things have come a long way from the days of Blockbuster and having to rewind your videotape or face being fined!

Andrew Grill suggested that in “less than 5 years time, people will use a digital agent rather than ads” 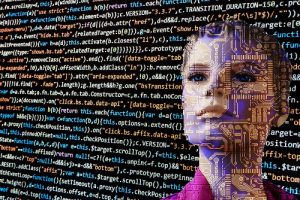 The future as a marketer we see ads run using AI and then have strategists to spend more time planning and putting things together and not the mundane admin. Although machine learning will

take away jobs, it will allow people to have more creative jobs.

Going forward with GDPR, Andrew suggested that we will see more value in our data and spend time working out how best to use it. Sky for example, now target ads to a household and if you switch channel, the ad is then lined up to show on that channel instead.

Another future-proofing tip from Andrew was to buy the .UK version of your domain name as he thinks, in the not too distant future, we will drop the .co.uk and just use .uk because this is easier.

How do you rise above the noise?

Andrew also talked about how you need to move with the times with your brand and make a desire for your product. He talked about how Lacoste had changed their crocodile logo as part of a PR stunt to different endangered species such as the rhino and then made them limited edition. They made as many shirts with each species as there were animals still alive. This created a buzz around the brand and ticked lots of boxes including animal activists, collectors and avid followers of the brand to name a few. It was very shareable content and it was also for a good cause. There was a new hype about an old brand and people wanted to get their hands on the limited edition t-shirts.

Create something that allows you to rise above the noise. Start to work on a campaign by campaign basis rather than trying to just do “marketing” as a whole. Create a marketing calendar and push one key area at a time. Workaround key areas in the retail calendar such as Valentine’s day and Black Friday. This doesn’t just have to be retail. Think outside of the box and at the present time, having something that is shareable content for social media will help you to be able to get the reach that you are looking for. Also making sure that you use an integrated approach across all of your channels PPC, Social Media, SEO, PR etc can have a real impact on the success of your campaign.