What’s the BBC Got Against Google?

This morning started like every other. A late bus and and a 45 minute commute into the office that was spent reading what caught my eye on my Twitter and Feedly feeds. This morning a story about the power of Google caught my eye, that’s not unusual, but the fact it was published by the BBC was.

The BBC often reports on news worthy events around the search giant but this is the first time I’ve come across a piece such as this that tries to explore how Google works, the changing landscape of search results pages and the wider concerns about the power Google wields in the search world.

The piece led with a quote from Danny Sullivan of Search Engine Land, which is clearly an attempt to lend credibility to the article. However, having reviewed the piece I was left somewhat disappointed and dismayed at the accuracy and tone of the piece and if this is the type of information the general public are reading about Google then it’s no wonder there’s an increasing ground swell of opinion that Google perhaps is abusing its position in the world of search.

So what got my back up. Well lets start with this quote;

“This quest for what Google thinks is the perfect search means constant tweaking of the algorithm – as many as a thousand changes a year – and an ongoing battle with those trying to game it.”

By ‘an ongoing battle with those trying to “game it” are they talking about SEO? That multi billion pound wholly legitimate industry that is designed to help those such as Andy Kitchener, who was mentioned in the story as having suffered at the hands of a Google algorithm update previously. SEO is not about gaming the system, it is about educating businesses who rely on online leads and revenue about how to better market themselves online within the best practices clearly set out in Webmaster Guidelines published by Google. SEO is not gaming the system. A responsible SEO company could well have prevented Andy from falling foul of Google’s updates.

And whilst we’re on the subject of Mr Kitchener, his quote also does nothing but fan the flames of suspicion at the way Google operates.

“It’s horrifying – it’s like having someone in your business that you don’t know , that will make their own demands and change the rules in an instant. It’s just a rollercoaster.”

If you rely on Google for traffic and sales then you play the game by their rules. And yes they may change them in an instant but it is their game and they care about searchers, not businesses who have failed to follow their very clear guidelines. I wonder if the algorithm update in 2013 he fell foul of was perhaps one of the Penguin updates that penalised sites for trying to game the system rather than following ethical SEO practices.

The second thing that irked me is that there is some very basic information in here that is simply incorrect. In the image below Rory Cellan-Jones states the search for ‘trout flies’ “produced one ad, some images, and a list of angling suppliers”. 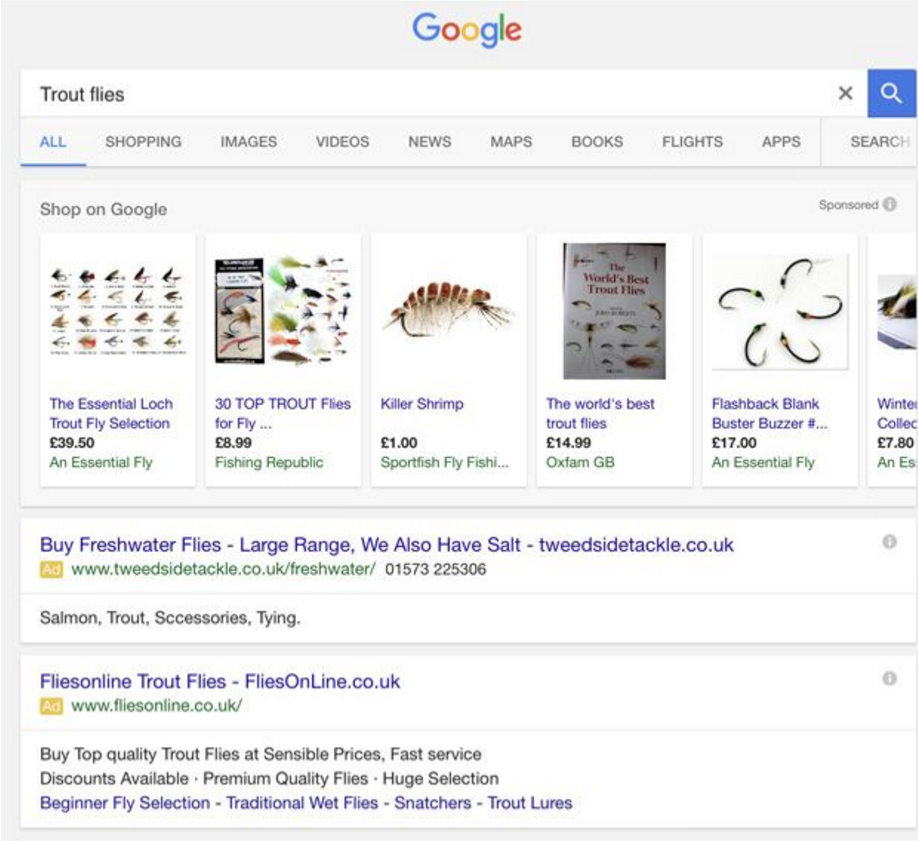 Well to begin with there’s a clear issue with basic counting skills as there’s two text listings clearly marked as ads. But more worryingly he’s described the shopping ads, a key innovation in paid search marketing and a highly profitable paid channel for many ecommerce businesses, as merely ‘some images’. It even marks them as ‘Sponsored’ indicating they are paid-for advert placements but this fact has been missed, ignored or simply not recognised. For the layman not familiar with Google advertising, this is highly misleading information.

Later on in the piece when discussing the results page for a search for ‘hotels tallin’ the local listings are described merely as “a map with a box showing some links” It then goes on to state that;

“according to rivals Yelp and Tripadvisor, which have complained about this practice, that map at the top is peopled by restaurants or hotels reviewed on Google+ rather than their more popular review services”.

Firstly those reviews are made on a companies’ Google My Business Page, not Google+ which has not been the name for company pages of this type for more than two years now. And secondly there is a suggestion in both the text and the image used that the only way achieve visibility in the local listings is to gain Google reviews which is clearly not true. Yes, the star ratings add prominence to a companies listing but listings that do not have Google reviews regularly appear above those with reviews. 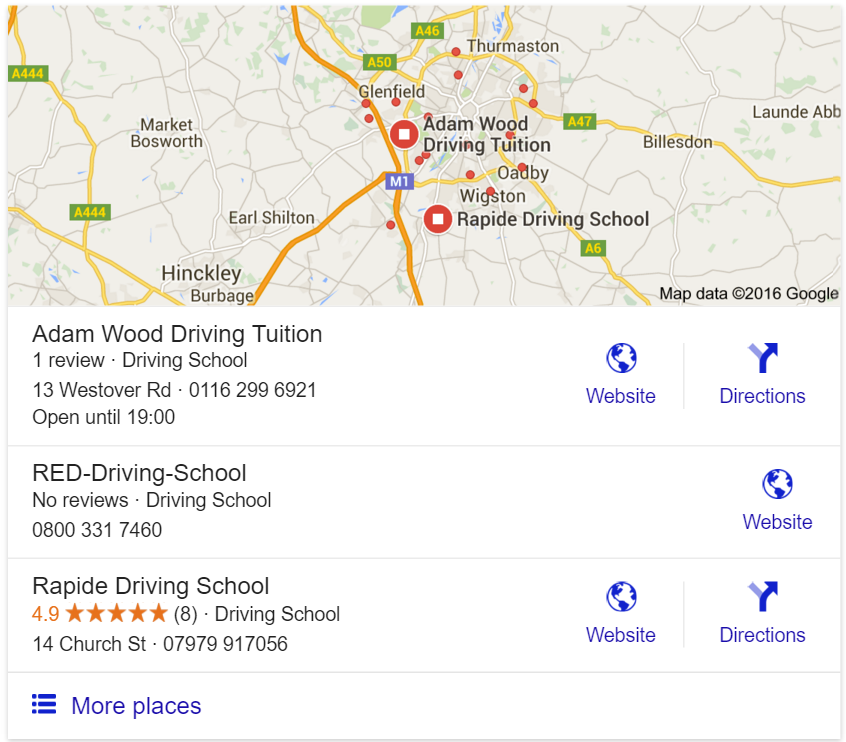 There’s no mention of the practice of Local SEO which helps businesses achieve visibility in this tailored section or that these local listings only appear for certain types of search results.

I appreciate there may not be the scope in this piece to fully explain the intricacies of local listings and Local SEO but the small amount of information offered is clearly misleading.

Fans of the wonderful Netflix show House of Cards may be familiar with the concept of search engines playing a significant and somewhat underhand role in elections. But in reality is this a notion or idea you want to put into the heads of the general public? I think not.

Whilst I fully appreciate the thoughts of Dr Robert Epstein and can fully comprehend that the results search engines deliver for politically related searches may serve users information that can help influence their thoughts on a particular candidate, it is bordering on the cusp of preposterous to perpetuate the thought that a single rogue Google employee could tweak a hugely complex algorithm to favour one particular candidate over another. Maybe at Pollyhop under the watch of Frank Underwood but not at Google. 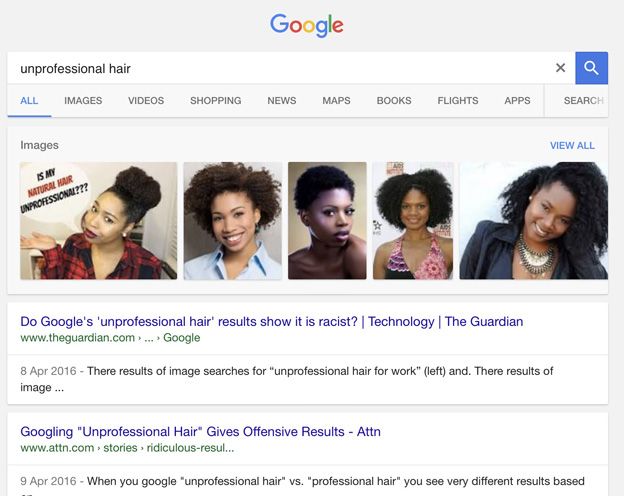 In fact the first image is from a YouTube video that is titled ‘Natural Hair Talk | Unprofessional & Professional Hair in the Workplace’ with page title tags and meta descriptions along the same theme. These key indicators as to the subject matter of a page are causing Google to recognise it as relevant to a search such as ‘unprofessional hair’ rather than Google choosing to pick that image above all else.

As for the second image, well lets take a look at the page where that image is being pulled from shall we. 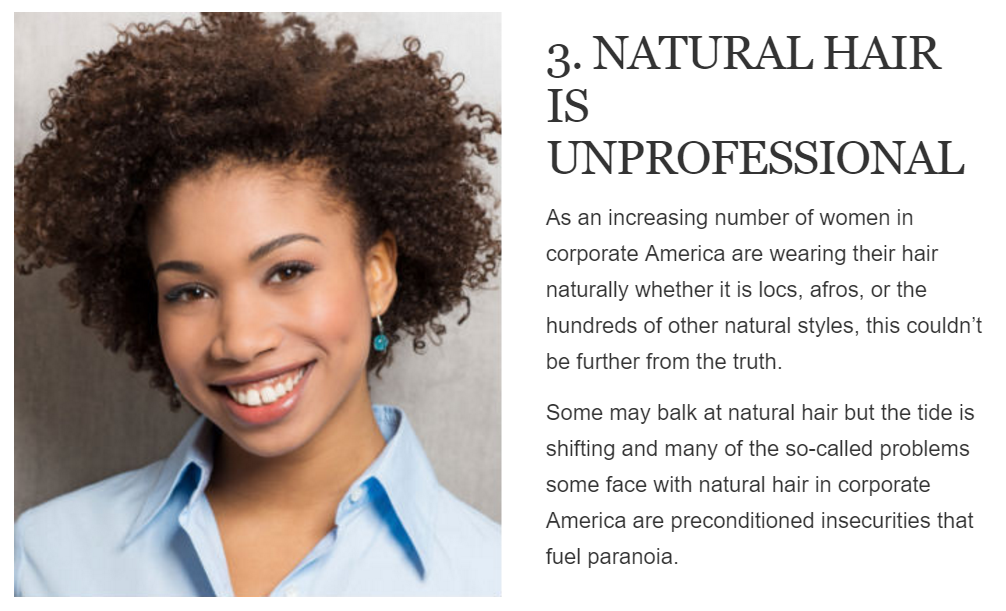 So, is Google’s algorithm a bit racist as Rory suggests or has he simply not done his research to fully understand how Google works? Given he finishes his article with the line “the information delivered to me and countless millions around the world is now determined by algorithms which even Google’s engineers don’t fully understand.” makes me believe it is the latter.

It is a piece I imagine Google would be very disappointed to see and as someone who regularly speaks to those outside of the digital world in order to help them try and better understand Google I feel the article offers a very poor and distorted impression of Google and that the BBC really should be offering better.