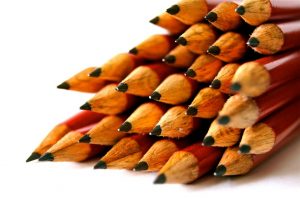 In a recent article that appeared on my Twitter feed,  Ann Handley, esteemed content marketing expert and Chief Content Officer at Marketing Profs, talked about how Facebook has recently declared the death of online written content, or rather predicting it will dead be very soon. And I wholeheartedly agree with Ann. Scaremongering much? Whiff of Brexit anyone? As Ann so eloquently puts it, Facebook clearly has an agenda. An agenda to become a social platform that favours video over written content. As a writer you may think, ‘ok she’s just protecting her craft and having her own pop at scaremongering’.

But really the devil is in the detail

Video is hugely popular no doubt and according to Lindsay Kolowich at Hubspot, 64% of users are more likely to buy a product online after watching a video. However, to steal Ann’s point, you can bet your bottom dollar that the majority of video content has a script or a set of cue cards behind it.

What about search? Search on engines such as Google and Bing relies heavily on written content. And we want more of it, with long tail searches, or in other words, more specific searches. People crave more information. Personalised, specific information.

Take Google’s Featured Snippets, aimed at providing all the answers to your long tail questions as accurately and quickly as possible. 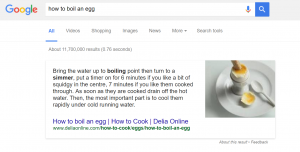 In my role at Anicca Digital, I carry out content audits of client websites and when comparing with competitors, I often notice that written content is one of the surefire,’quick win’ ways to beat the competition. Of course not just any old written content but relevant, interesting, ‘paid well’ content.

But hang on a minute…

Haven’t Facebook recently launched their Instant Articles? According to Facebook, an instant article is ‘a new way for any publisher to create fast, interactive articles on Facebook’. It’s a great feature for mobile phones and smart devices with articles loading 10 times faster than standard mobile web articles. But isn’t an article made up largely of written content? 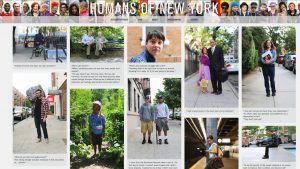 Humans of New York  is a fantastic example of highly successful content that owes it’s success to the stories told (written). And Brandon Stanton, who started the series off as a hobby, has become a best-selling author as a result. According to Wikipedia, the Humans of New York Facebook page has more than seventeen million likes. Seventeen million…

Why does it work? Because as humans we are naturally curious about others and the stories are more often than not, touching, inspiring and uplifting. In a world that can often seem harsh and cruel, it is a welcome ‘respite’. None of this would have happened without the words.

In Content Marketing Institute’s ’21 Types of Content We Crave’, Humans of New York ticks the box of many such as;

I love a good piece of video myself and understand it is vital to any content marketing strategy (just take a look at Karan’s blog about the importance of video), but claiming that written content is nearing it’s life’s end?

It’d be good to hear your views…